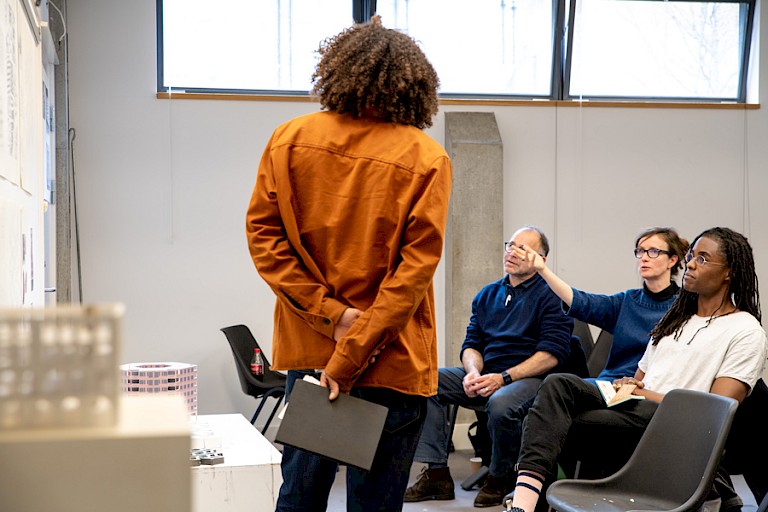 The housing crisis has forced policy makers to address how we can increase the number and quality of homes available across the country. However, it’s only of late that schools of architecture have begun to engage students again in the design of the most fundamental building typology.

From the late 1970s until recently, the design of housing did not find its way into a student’s developing academic portfolio and has been actively discouraged as an area of study by some tutors in schools of architecture across the UK. To many studying architecture in central and northern European countries outside the UK and in the US, this seems incomprehensible – outrageous even. For students to have no understanding of the history, joys and complexities of designing homes that they themselves might live in, a built typology which forms 90% of the fabric of all our cities and is the very foundation of every aspect of our lives and wider society, is utterly perverse.

My peers and I, who studied in the 90s, often struggled to find tutors who supported design projects that tackled this most crucial building type, and many, sadly, were convinced instead to focus on high profile, civic building briefs or bespoke blends of extreme functional programmes, unlikely to ever exist outside the confines of an academic environment. Of course, much can be learned from these projects, but to overlook any analysis and design of housing in either under graduate or post graduate architectural programmes seems an extraordinary omission, and perhaps, one could conclude that it is not so surprising when poor quality housing continues to be smeared across and around our towns and cities. It is, perhaps, the result of our profession promoting an education system that has failed to value housing as worthy of inclusion within the academic curriculum of young architectural students across the UK. There is no doubt that much of this poor housing has been designed and built without any involvement of a qualified architect, but it does illustrate, that, as a nation, we have somehow accepted, in the recent past, that housing does not need the skills of architects, and therefore academic institutions have no responsibility to involve students in its study.

And yet there is such clear evidence to the contrary. Look no further than the influence of the Architectural Association and Polytechnic of Central London during the 1950s and 60s. Both schools created a highly articulate, talented group of socialist architectural graduates, committed to the fundamental right of all to well designed housing. Ultimately this cohort provided rich pickings for Sydney Cook as he built the London Borough of Camden’s architectural division, with Neave Brown at the helm, who went on to design ground breaking, high density, low rise housing at Fleet Road in Belsize Park and Alexandra Road in Swiss Cottage. Peter Tabori joined the team in quick succession, headhunted from PCL by Sydney Cook, with his thesis project in tow, proposing new housing on the slopes of Highgate and charged with delivering it at just 25 years old. Other contemporaries of Neave’s at the AA also went on to design similarly radical new housing, including Patrick Hodgkinson with the Brunswick Centre in Bloomsbury.

And so now, given the dearth of skills and resource within Local Authorities due to the rapid austerity-driven decline in central government funding, we should be encouraging aspiring architects to study housing, enabling more skilled designers to enter Local Authorities when they graduate. A state funded, national house building programme, which is what we need to ease the availability and affordability of housing in the UK, requires a complete re-skilling of the industry – design skills, construction skills, management skills – and this needs to start in academic institutions. The work of Public Practice, with their cohort of seconded architects and urban designers into Local Authority departments is inspirational – and now launching its second year intake, but it is not enough. The work must start at the beginning of architectural education, not the end.

The picture is beginning to change for the good. Housing projects and studios are now appearing in several different schools across the UK, some led by leading practitioners working in housing, such as Alex Ely at The CASS and Peter Barber at the University of Westminster. Housing projects are evident at Sheffield, Newcastle, Oxford Brookes, Nottingham Trent and Liverpool schools, to name a few, in under graduate and postgraduate courses. In addition, a specialist housing masters is due to appear in the London based studio of Liverpool University in the next couple of years and the Housing and Urbanism Masters Unit goes from strength to strength at the AA, with Lawrence Barth and Dominic Papa amongst others. A Senior Lecturer in Housing Design, Policy & Development is also being advertised by the University of Westminster this year.

Following the publication of The Housing Design Handbook last year, David Levitt and I embarked on a national tour of architectural schools to prompt a wider conversation about the importance of good design in housing within academia. Already we have encountered 11 schools in the last five months and there are more visits to come. Our intention has been to empower students with the knowledge and confidence to design good housing, and always advocate for quality in their working lives – whether within a Local Authority or private practice. It has been heartening to see a renewed passion for housing across the country from both students and academics – due no doubt also to the ever-increasing crisis faced by so many of us and the stark, visible increase of homelessness on our city streets. Many of the lectures have involved hundreds of engaged, informed students, and most events have been initiated by the student body themselves, including Metropolitan Architecture Student Society's (MASS) highly successful Megacrit in April.

Above all, the Megacrit clearly illustrated students’ desire to learn about housing of all types, with a real thirst for guidance and inspiration from architects working at the forefront of the profession. Issues that practicing architects are challenged with every day – such as intensification, social mix, privacy, sustainability and affordability – were approached thoughtfully with depth and enthusiasm and often led to inventive, highly experimental design solutions.

So, join the campaign to spread the word and ensure our academic institutions place housing front and centre in curriculums across the country. It needs to be seen as essential: a core, critical area for design invention, research and exploration that needs promotion and support from the moment an architectural student steps into the studio on the first day of their architectural education.